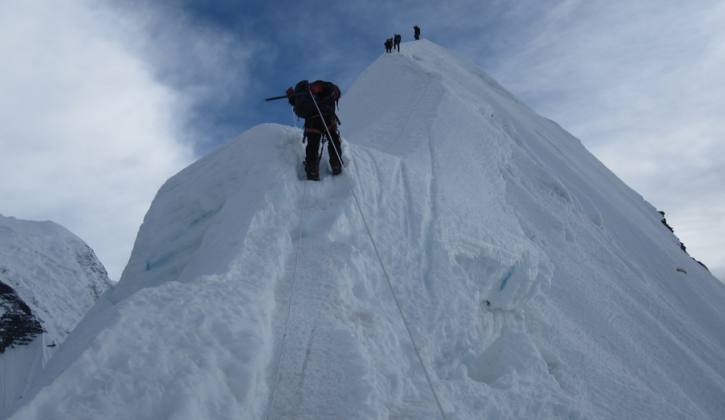 Climbing season: Spring (March to May) and autumn (October to November)

Island peak climbing is one another most adventurous trips and also for having wonderful mountain vista in the Everest region. [Island peak Climbing]

Island Peak (6,183 m.) also known as Imja Tse peak, is one another most popular peaks for climbing in Nepal, located in the Everest region. The British national, Eric Earle Shipton had named Island peak in 1953, as the peak resembles and Island in a sea of ice. He saw this when he said to have views from Dingboche. Later in 1983, the peak was renamed as Imja Tse. This peak was said to have first climbed by the British team in 1953 in course of making summit to the Mt. Everest, Tenjing Norgey Sherpa was one of the members in the team.

Island peak climbing trip begins with a short flight from Kathmandu to Lukla and then trek continues through Phakding Namchhe Bazaar and enters in to Khumjung village and then Tengboche, Dingboche, Chhukung and finally reach at the Island peak base camp and then head up to high camp and then climb to the peak and then retrace back to the base camp and after having excursion all around the peak, you also retrace to Pangboche and then Khumjung and the finally get back to Lukla via Phakding and then fly back to Kathmandu.

Day 13:Trek to Gorakshep 5100m and Explore to B. C. after lunch and return to Hotel

Day 18:Fly back to Kathmandu

Day 13Trek to Gorakshep 5100m and Explore to B. C. after lunch and return to Hotel

Day 18Fly back to Kathmandu