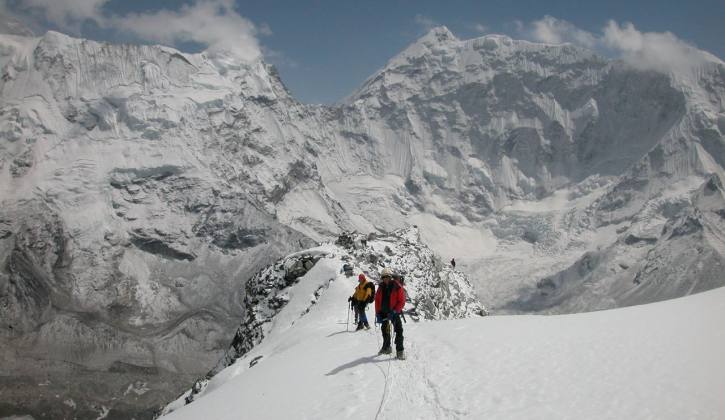 Peak climbing in Nepal is one of the best adventurous trips in the world.

Peak climbing is one the best adventurous trips in Nepal. Nepal has such a number of peaks, as none of the countries in the world has it, therefore why Nepal has been the ultimate destinations for peak climbing trips.

Peak climbing in Nepal is said to have been popular ever since Tenzing Norgey Sherpa and Sir Edmund Hilary successfully summit the world's highest peaks--the Mt. Everest (8848 m) in 1953. Since then, there has been a number of reporting about the peak climbing trips in Nepal internationally, and no doubt immeasurable number of travelers from across the world have made it to Nepal for having this particular trip.

You also can combine the peak climbing trip with other trips such as trekking, rafting, bird-watching etc or merely go for this particular trip. The peaks in Nepal are the best view point from where you will have amazing views of mountains vista and incredible landscapes, so as explore the charming villages of various ethnic groups residing alongside of the trial and no doubt the diverse flora and fauna and more. These are the testimony that peak climbing trip in Nepal is perhaps one of the best adventurous sports in the world. Therefore perhaps thousands of travelers make it to Nepal every year merely for peak climbing.

Ministry of Tourism and Civil Aviation and Nepal Mountaineering Association (NMA) jointly or separately issue the authority if you are willing to have peak climbing to any peaks in Nepal. NMA grants permission to climb peaks bellow 7,000 meter, while the mountaineering section of the Ministry of Tourism and Civil Aviation issues the permission to the peaks above this height to the world's highest peak, the Mt. Everest. The charge for peak climbing vary on the number of members involved in a group and the height of the mountain you want to climb as well as the adventurous sport you want to organize in the mountain areas. Adventure Gaurishankar Trek and Expedition has long been organizing the peak climbing trips and has set the track record nationally. Therefore, feel free to contact us for peak climbing, whether you wish to travel in group and individual. If you are willing to have peak climbing trips, let us know prior for the legal formalities and preparation for the successful peak climbing trips with us in Nepal.