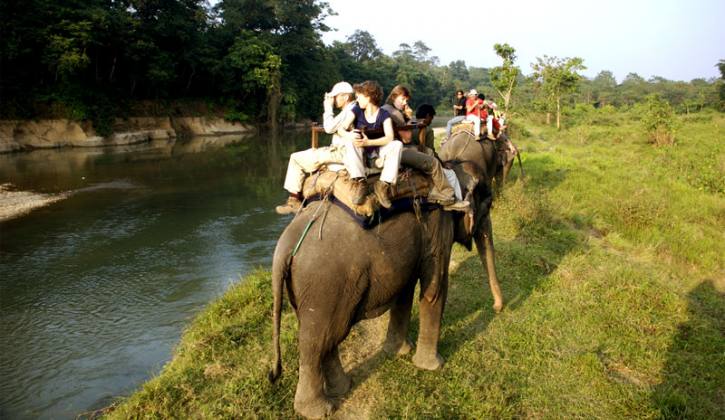 Jungle safari is one another most popular and amazing trips for exploring diverse flora and fauna, including endangered birds and animals, various species of plants and more.

Jungle Safari in Nepal is one another the most amazing and popular trips in Nepal, primarily for those who are fond of exploring diverse flora and fauna of the country. Nepal is rich not because of the white Himalayas alone but also diverse flora and fauna. And, thus, this tiny but amazing country has become an ultimate destination among the world's nature lovers wishing to explore the endangered animals, birds, various species of flora and fauna. Nepal's nearly 20 percent of land is protected and filled with the green and steamy jungle, which is the home of over 850 species of birds--that stands nearly 8 percent of the world's bird's population. Nepal's steamy jungle is also the home to nearly 2 percent of world's flowering plants, over 500 species of butterflies, 600 indigenous plant families, 320 species of exotic orchid and more. These are some of feature why Jungle safari has been of the most popular and demanded trip among the travelers coming to Nepal.

We, the team of Adventure Gaurishankar Trek and Expedition have been organizing mere a day to a week or long Jungle safari trips on foot or with elephant or jeep ride. During the trip, you will spend weeks and weeks relaxing in the serenity and tranquility and exploring of endangered species of birds, wild animals, different species of plants and more. You will no doubt be amazed with beautiful scenes and sceneries, and also encounter with a number of wild-life and number of birds which are in the verge of extinction and species of plants more offering you options for photography.

The moment you spend in serene parks and preserved areas in Nepal is full of fond and memorable in your lifetime. There are 9-national parks, 4-wildlife reserves, and three-conservation area in the country. Of these, Royal Chitwan National Park, Parsa Wildlife Reserve, Royal Bardia National Park, and Royal Shukla Phanta wildlife reserve offer jungle safari on elephant back or jeep rides. If you are wishing to have jungle safari, feel free to contact us if you wishing to enjoy with the most recreational activity which no doubt is the jungle safari trip in Nepal.