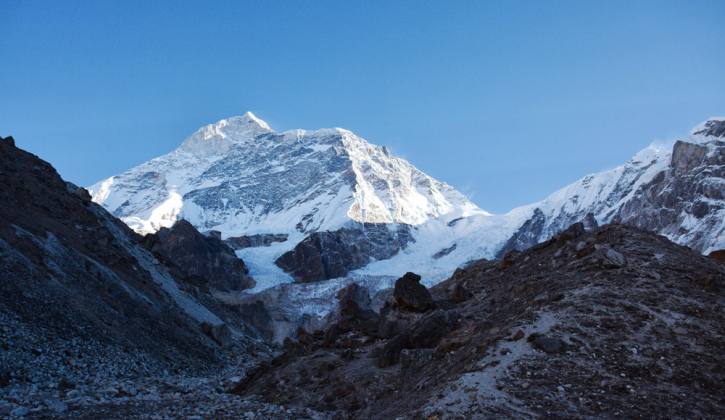 Makalu Trek is a combination of mountain passes, sloppy and rocky hills full of snow, steamy jungle full of flora and fauna, stunning mountain vista, the charming settlement of various ethnic groups who are rich in culture, rituals, lifestyles and many more. [Makalu Trek]

Mt. Makalu (8,463 m) is the world's fifth highest mountains, out of 10 highest peaks above 8,000 meter peak across the world. Mt. Makalu is one of the rarely trekked jewels in the eastern part of the country, due to its remoteness. But the wilderness in the areas is really awesome found nowhere else in the world, awaiting your arrival for exploration. The Makalu Trek is a combination of the journey where you have to cross a number of mountain passes, sloppy and rocky hills full of snow, steamy jungle full of flora and fauna, stunning mountain vistas, the charming settlement of various ethnic groups who are rich in culture, rituals, lifestyles and many more.

Makalu trek is protected by Makalu Barun National Park, Nepal's one of the largest national park, established in 1992. The park is one of the attraction of this trekking, which is the home of a numerous of endangered species of birds and animals many of them are in the verge of extinction. The region shelters as many as 3,000 species of flowering plants, 440 species of birds and 75 species of mammals. The giant peak, Mt. Makalu (8,463 m) and a number of other mountains including Mt. Chamlang (7,319 m), Mt. Baruntse (7,129 m) among others are towering above right in front of your head, above Barun valley. Besides you will be mesmerized with stunning mountain vistas including of Mt. Makalu (8,463 m), Mt. Everest (8, 848 m), Mt. Lhotse (8,516 m), and others. Similarly, you will have an opportunity to spend time in the charming settlement of various ethnic groups namely of Rai, Limbu, Sherpa, Lhomi among others and explore their unique culture, lifestyles, and have fond of their warm hospitality. The Makalu region trekking mostly revolves around the Arun valley. The valley, of the mighty Arun Koshi runs north and from the plains to the fringes of Makalu Barun National Park in the foothills of Mt. Makalu, the fifth highest mountains in the world.

Makalu trek begins with a short flight from Kathmandu to Tumlingtar and then the trail leads you up to Manebhanjyang, the valleys, where there are the settlements of many ethnic communities. Subsequently, the trail passes through the lush forest and valley, reaches at Chinchilla and then to Num, Seduwa, Tashingaon, Khongma, Mumbuk and through Neh Kharka, Yak Kharka and finally you will reach at Makalu base camp and after making an excursion whole around, you will retrace back to Neh Kharka and then to Mumbuk, subsequently to Khogma, Seduwa, and then at Num, Chichilla and Manebhanjyan and finally return back to Tumlingtar and fly back to Kathmandu.

Day 21:Fly back to Kathmandu.

Day 02Fly to Tumling Tat and Trek to Khandbari 1020m

Day 21Fly back to Kathmandu.