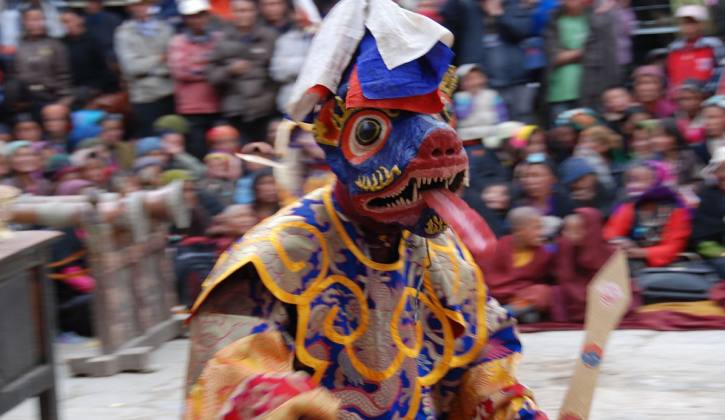 One of the popular trek for primarily exploring the forbidden kingdom, weird natural wonder, a treeless barren and no doubt a special Tibetan festival--Tiji festival, and also relax in the serenity and discover this mysterious kingdom and enjoy with unique rituals, culture and lifestyles of this forbidden kingdom--Mustang. [Mustang Tiji Festival]

Tiji Festival Trek in Mustang district is one of the popular trips in Nepal, ever since Mustang was open to the outsider in 1992. Mustang is known as 'lost kingdom' or 'the forbidden Kingdom', located in the western part of Nepal, which is no doubt a remote and mysterious village, where mostly Tibetan origin people inhibit. Tiji festival is one of the special festivals of Tibetans. Therefore during the trek you will be able to explore the Tibetan culture, customs and rituals and no doubt the enjoy with having stunning views of the Annapurna Himalayan range, and stroll around the ancient walled city of Lo Manthang, with its palace and ancient monastery. Mustang has been one of the popular trekking for exploring for mysterious kingdom in itself and its blend of culture and the Himalayan vista. As it remained in isolation from the outsiders for long time, this very isolation helped people of Mustang to maintain their lifestyle, and heritage intact, such as Tiji festival. This festival is observed in Lo Manthang, which is known as the chasing of the demons. During the festival all the inhabitants of Lo Manthang take part in this three-day show of music, colorful costumes, and elaborate dancing. The celebration revolves around the story of a deity, Dorje Jono, who battles against his demon father. Eventually, good triumphs over evil and the father is banished.

Thus, during the trek, you will not merely observe and explore the Tiji festival alone but explore whole around Mustang, the arid Tibet like region at the north end of the Kaligandagi, is the name of the capital of Lo, the city of Manthang. The capital of Lo is named as Mangthang, which translates from the Tibetan as 'Plain of aspiration'. Mustang is divided into two--upper and lower Mustang, both have a number of attractions. The former Himalayan Kingdom of Lo, now known as upper Mustang-is often depicted as Nepal’s hidden Shangri-la, a remote outpost largely isolated from the outside world. But these days, it has been one of the ultimate destinations among travelers coming to Nepal. In medieval times, upper Mustang was an independent kingdom, its location giving it control over trade between the Himalayas and India. Lo Manthang, which for centuries served as the capital, is known for its white painted buildings, built of whitewashed mud bricks and teeming with Buddhist prayer wheels and Stupas, frequently draped with colorful Buddhist prayer flags. The whole region is one of the few places in the country where traditional Tibetan culture has survived intact.

During Mustang Tiji Festival trek, you will have an opportunity to explore the weird natural wonder. Lo Manthang is located at the heart of Mustang, which is a treeless barren. Similarly, you will also explore the numerous of Buddhist monasteries and nunneries built with forbidding cliffs and no doubt visit to Kagbeni, a quaint medieval town nestled in apple orchards and encircled by majestic mountains. Located in the Himalayan shadow, rains much less in Mustang than the rest of other areas in the country, and therefore, it is possible to have trekking during the rainy season.

Mustang Tiji festival Trek begins with short flight from Kathmandu to Pokhara and then the trail passes through small villages, terraced hillsides, rhododendron and bamboo forests, ascending to Ghorapani and Poon Hill for splendid dawn views of Dhaulagiri and Annapurna. The route then enters into spectacular Kali Gandaki river valley and finally takes you to Mustang, Lo Manthang and after making an excursion around you will descend down to Muktinath—famous temples, alongside of Kagbeni and finally descend down to Jomsom and then fly back to Pokhara, subsequently to Kathmandu.

Day 03:Fly to Pokhara over night at Hotel

Day 04:Fly to Jomsom and Trek to Kagbeni

Day 18:Fly back to Pokhara.

Day 19:Fly back to Kathmandu

Day 03Fly to Pokhara over night at Hotel

Day 04Fly to Jomsom and Trek to Kagbeni

Day 18Fly back to Pokhara.

Day 19Fly back to Kathmandu