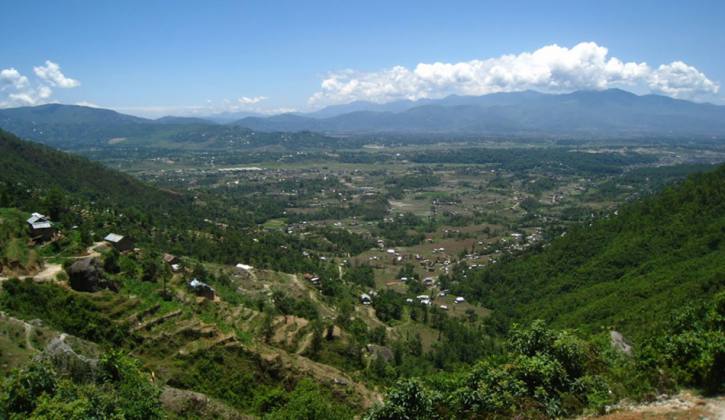 Shivapuri trek is a short and ideal trek for having amazing views of Himalayas to the north and flat sprawling Kathmandu city in the bellow, moreover have wonderful bird-watching trip. [Shivapuri Trek]

Shivapuri trek is located to the north of Kathmandu valley, sprawling forests of Shivapuri National park. The Sivapuri jungle was upgraded to the national park status in 2002, in order to protect Kathmandu valley's water sources as as well as endangered species of birds housing in the Jungle. Shivapuri trek no doubt is one of the short and ideal trekking trips for those who prefer comfy trek and also for those who are fond of watching birds. The park that covers 144 sq km; is the major watershed supplying drinking water to the Kathmandu, the capital city of Nepal and is renowned for the watershed and wildlife. It is highest hill that surrounds Kathmandu valley and offers amazing views of the Himalayas from very close and flat Kathmandu valley in the bellow, no doubt the amazing scenes and sceneries.

Shivapuri is the home to over 180 species of birds including stork, egret, wood pecker, and Black-headed shrike, pheasant, cuckoo, crows among others, and numerous other flora and fauna including the orchid flowers, pine, oak, rhododendron and more and equally houses a number of rhesus monkeys, even leopards, black bears, tigers, jungle cats, and other wildlife. Similarly, it is the home to over 100 species of butterflies many of them are in the verge of extinction in the world.

Shivapuri hill is situated merely 12 km away from Kathmandu. Which is also the main gateway to a number of trekking route namely to Nagarkot, Gosainkunda, Helambu, and Langtang region, where there are settlements of various ethnic groups namely Tamang, Newar, Sherpa to name a few. You can enjoy the local dishes and delicacies, take snaps of picture and rest in the local homes, otherwise, retrace back to Kathmandu. This is one of the short treks organized by the team of Adventure Gaurishankar Trek and Expedition.

Shivapuri trek begins with a short drive Kathmandu downtown to Budhanilkantha and then continue hiking, alongside of the trial presents splendid sights of the central and eastern mountain ranges, breathtaking sunrise and sunset and the Nepali rural life. From Shivapuri you also have three options, round off the Shivapuri trek and head on to Dhulikhel or Nagarkot or get back to Kathmandu.

Day 03:Drive to Kakani over night at Camp

Day 07:Drive back to Kathmandu

Day 03Drive to Kakani over night at Camp

Day 07Drive back to Kathmandu