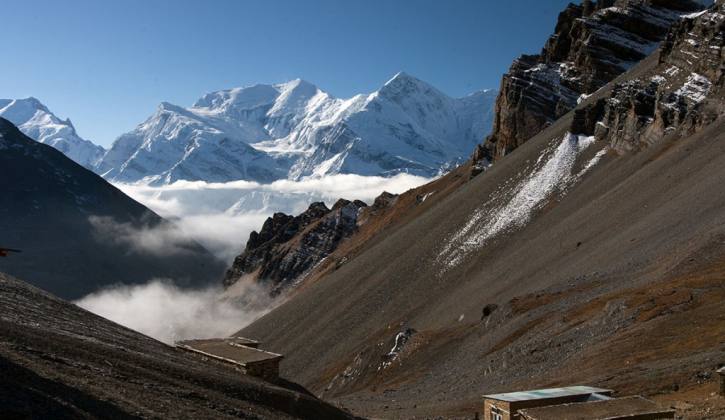 With its unparallel natural beauty, spectacular scenes, and sceneries of the majestic Himalayas and more, Annapurna trek, the trekking in the north-western Nepal is famously touted as world's best trekking routes. [Annapurna Circuit Trek]

With its unparallel natural beauty and spectacular scenes and sceneries of the majestic Himalayas and more, Annapurna trek is famously touted as world's best trekking routes. Mt. Annapurna I (8,091 m) region trek is one of the best known trekking destinations in Nepal, located in the north-western Nepal. It is one of the frequently organized trekking packages among the team of Adventure Gaurishankar Trek and Expedition team. While trekking to this region, you will also be able to navigate another highest mountain above 8,000 m, the Mt. Dhaulagiri (8,167 m) located to the west of Mt. Annapurna. Between these two mountains runs the Kali Gandaki River, the deepest gorge on earth. During the trek, you will pass through terraced and fertile farming land, lush, steamy and yet undisturbed forest full of flora and fauna, beautiful charming settlements of various ethnic communities, incredible landscapes, glaciers, and no doubt, you would be bounded with amazing views of the majestic Himalayas in the region. The special feature of this trekking trail is that you will be amazed with something new scenes and sceneries every single day. You will have superb sceneries of amazing views of Mt. Manaslu (8,163 m), Mt. Annapurna I, (8,091 m), Mt. Annapurna II, Annapurna III, Annapurna IV, Mt. Dhaulagiri, Mt. Langtang among others

Annapurn trek is certainly one of the most popular trekking routes in Nepal, bounded in the west by the Barbung Khola and Dolpo and in the east by Budhi Gandaki, notable for its deep gorge through the Himalayas and its enormous hydroelectric potential. The Annapurna region covers a wide range of trekking destinations from well-developed trail to the remote and semi wilderness areas, requiring special permits. The trail is protected by Annapurna Conservation Area Project, the area covers from merely 790 m to the 8,091 m height, the Mt. Annapurna I, the tenth highest mountains in the earth. The lower elevations are spread of the settlement of various ethnic groups like, Gurung, Magar, Thakali, Sherpa, Brahmin, Chettri and so many other ethnic communities.

Starting from the lake city of Pokhara, you will pass through superb terrain; mixture of different culture and ethnic settlement, the trial leads you to Jomsom, and also takes you through Manang, Mustang, and then the base camp of Mt. Annapurna. You also can have short trek to Sikles and Ghandruk area, the popular destinations in the region. The Annapurna circuit is by far the most popular and requires at least three-weeks to go around the Annapurna massif. The trekking goes counter-clockwise from Besi Sahar, off the Pokhara-Kathmandu highway, to Naya pool and reaches its high point and making encircle, your trekking ends back in Pokhara. Pokhara, 200 km west of Kathmandu is the starting and ending point of Annapurna trekking. If you wish to explore, Mustang, you can have a flight to Jomsom from Pokhara, whereas, if you are wishing to trek in Manang, then you can catch airplane to Chame from Pokhara.

Day 20:Fly back to Kathmandu

Day 20Fly back to Kathmandu